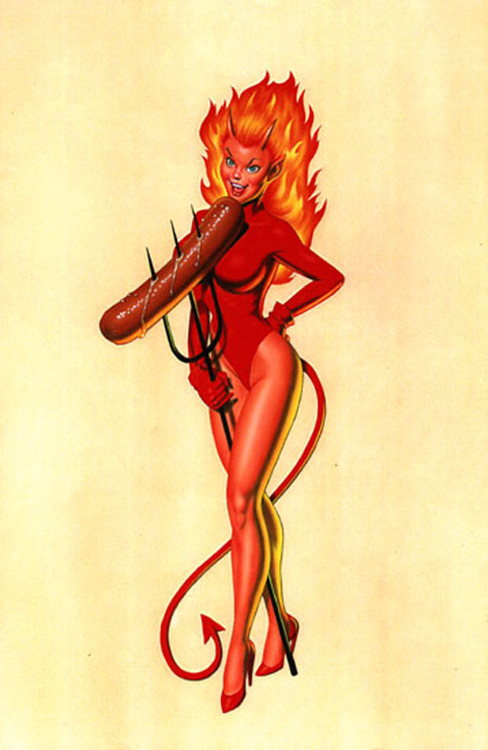 I apologize for the low resolution images. Zontar22 never got around to sending me better ones. 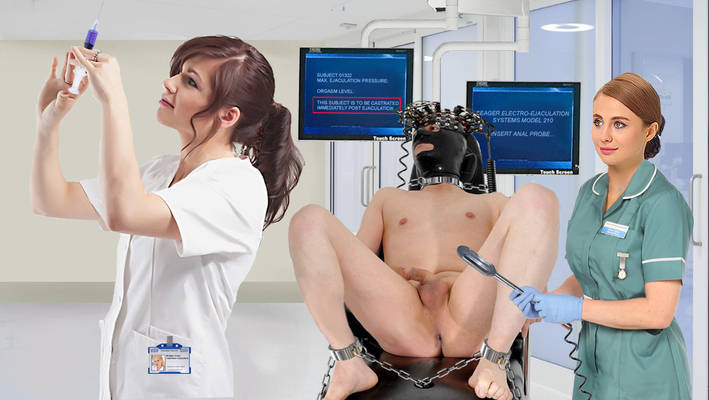 In this one the nurse on the right is about to insert the electro-ejaculation probe. As part of the rules governing castration by chemicals, they must send his semen for analysis, so it can be compared with a sample taken in a week’s time, to ensure the chemicals have fully dissolved the testicles.

The doctor will inject the chemicals directly into the testicles. The chemicals take several hours to break the testes down into harmless mush, which is absorbed by the body. The rubber mask helps keep in place the mind control helmet, though which he will be brainwashed. 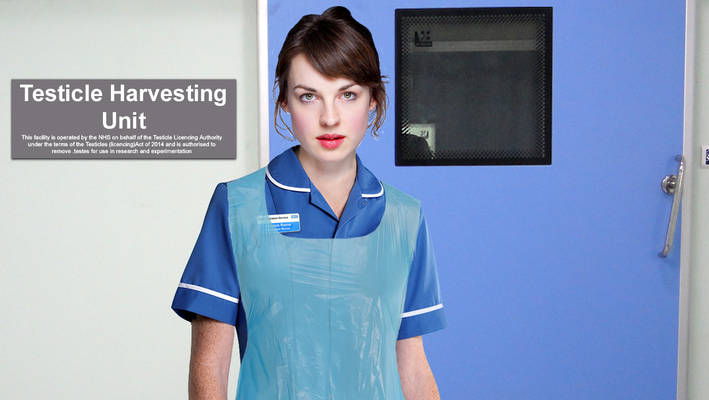 For purposes of furthering the population, sperm will only last so long when frozen. To allow fresh sperm to be used, some males are not simply castrated. Their testicles are harvested as working organs and are kept alive to produce sperm. 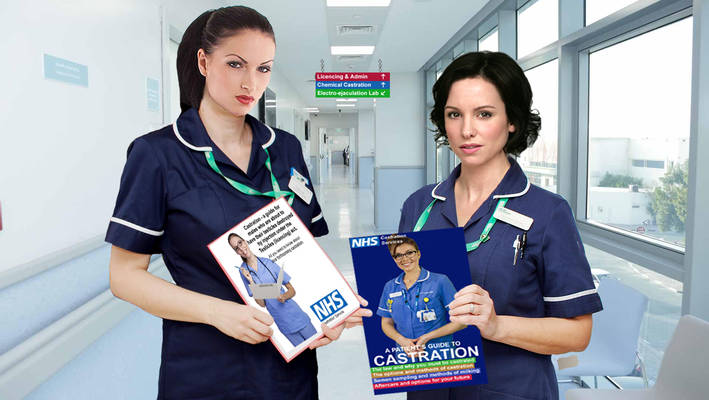 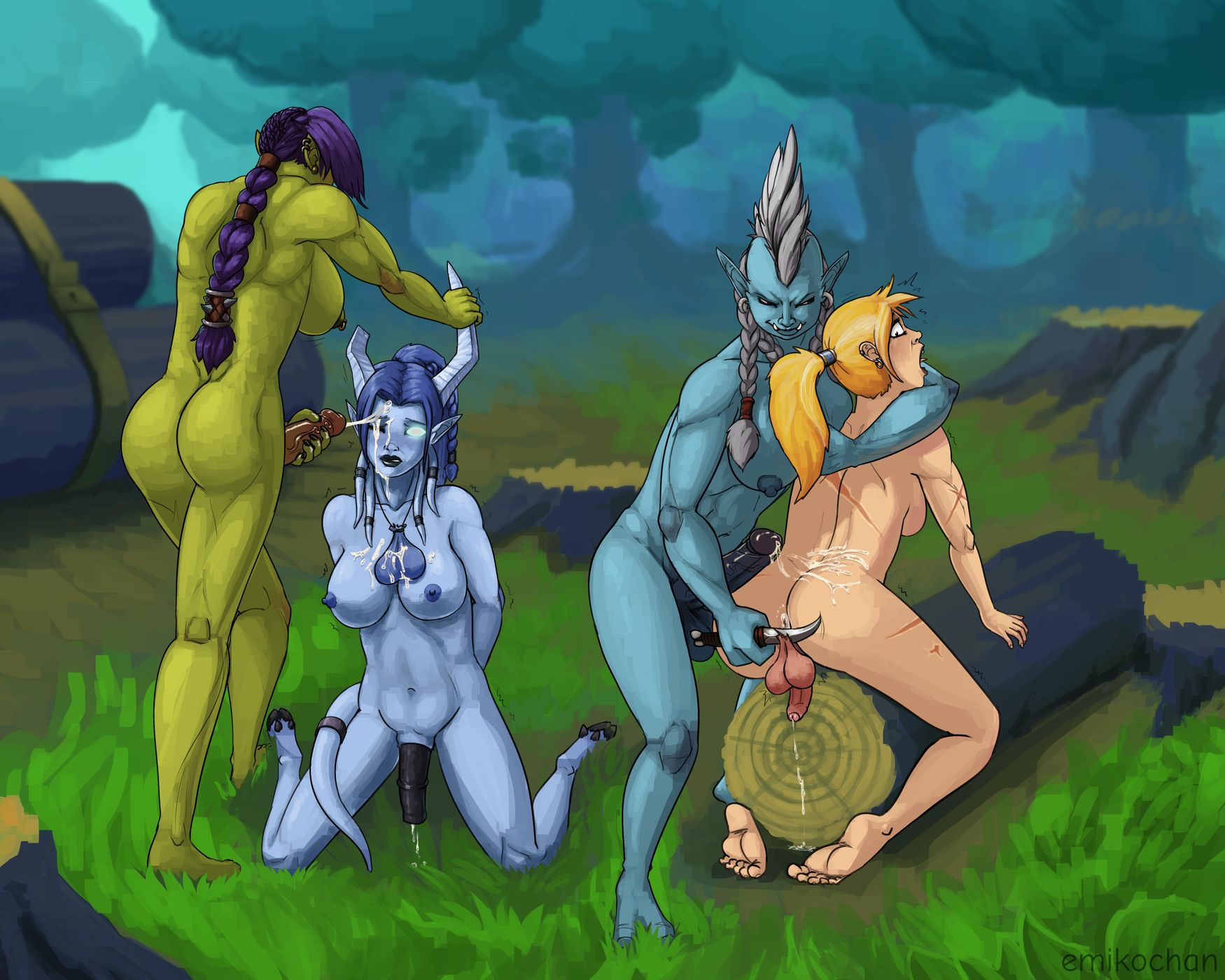 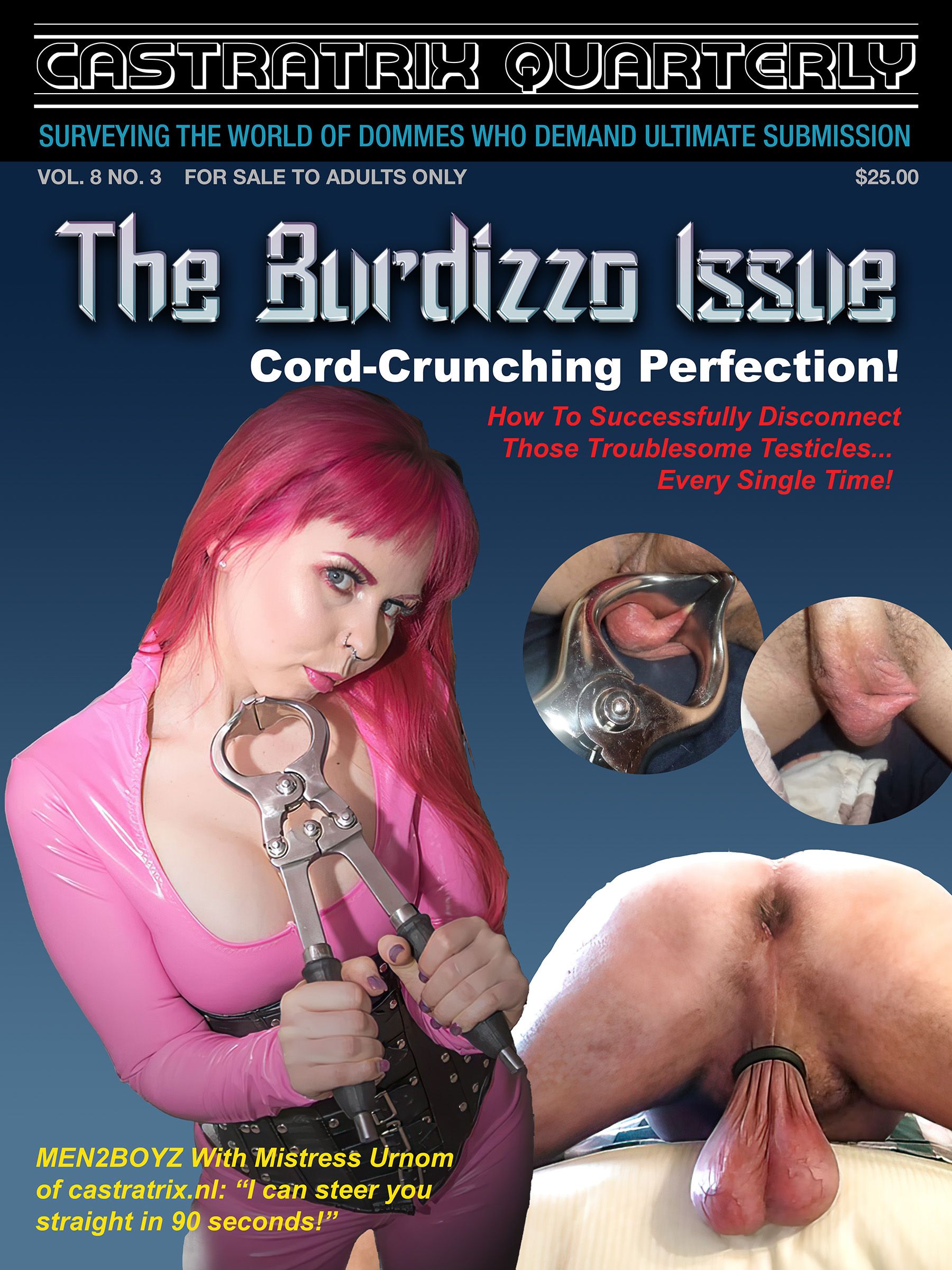 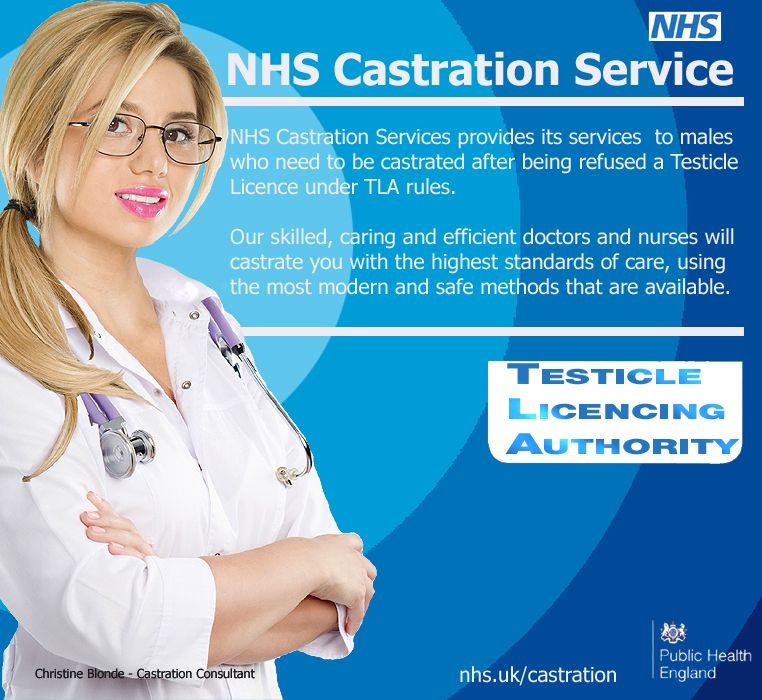 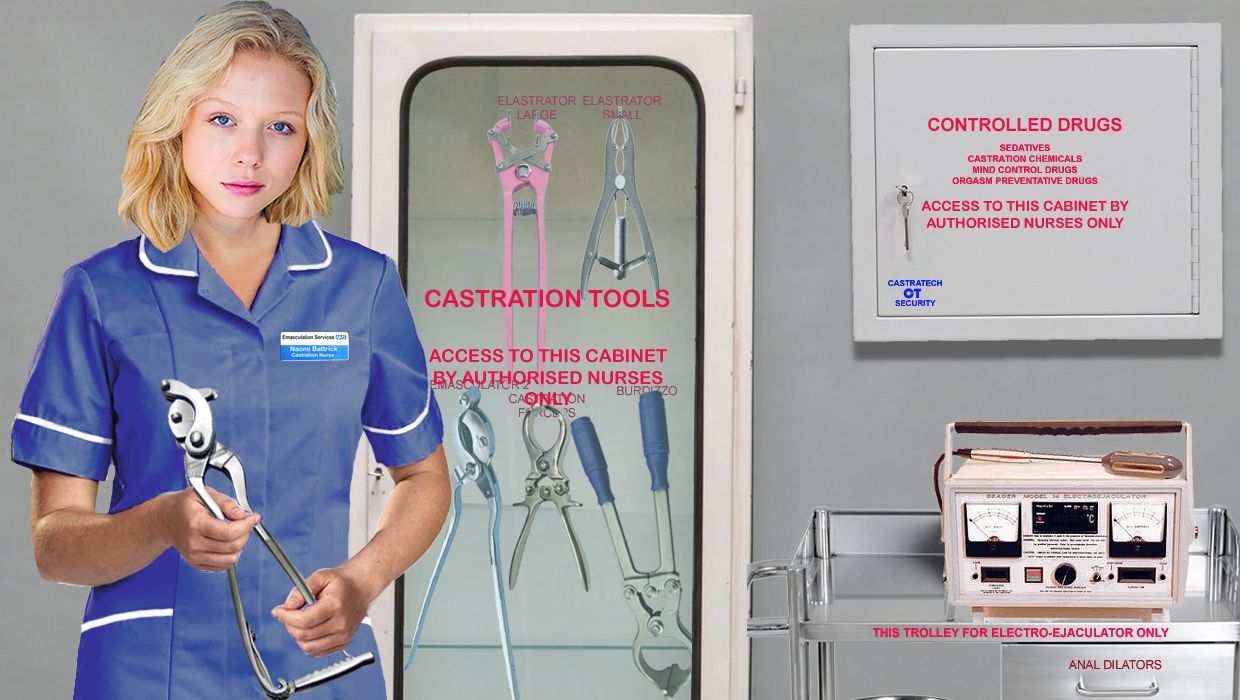 Nurse Naomi works in a general Castration Centre and has to know how to use all types of equipment and drugs or chemicals. 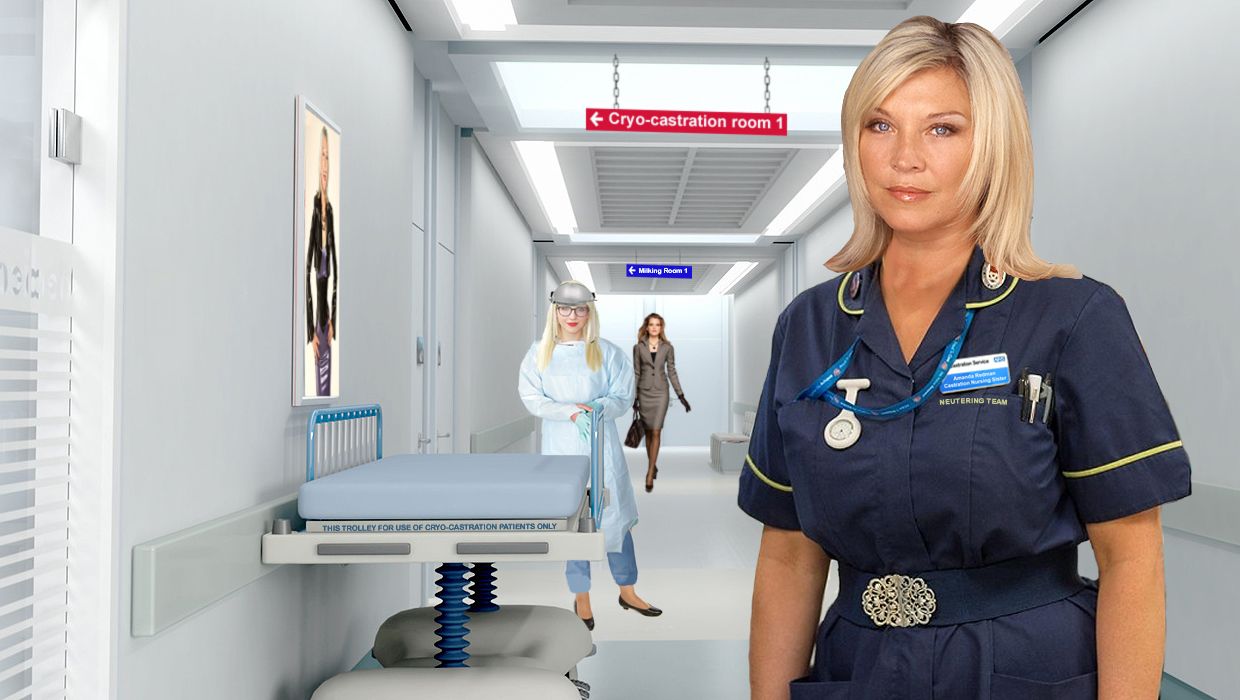 This last one is an experimental treatment, where liquid nitrogen is injected into the testicles to destroy them. The foremost figure is the Sister in charge of the unit, then we have the doctor, wearing the face shield to protect her from accidental spillage, and finally the lady in the skirt suit is the Unit Manager.

Back in the early 1900s, the Women’s Suffrage movement, in Britain, where women wanted the vote, there was not only the public protest etc. but a secret group, known as The Sisterhood, were operating behind the scenes. They wanted more than just votes. They didn’t even want equality, no, they wanted a Female Supremacy!

Eventually they were in a position to control the whole of Britain, Europe and the US. Laws were introduced to prevent males from holding positions of power and certain jobs.

It was decided that many problems in society were caused by males and the root cause was the hormone Testosterone. Testosterone become a controlled substance and as it is naturally occurring, and made in the testicles, a law was passed where every male over the age of 16 must apply for a Testicle License. Various forms had to be filled in and males had to have a sponsor, such as a wife, who wanted them to retain their testicles, in order for a license to be issued.

All males who were refused a license by the Testicle Licencing Authority, had to be castrated. These images show the doctors and nurses who work in the Castration Centres. The main company that produces the equipment is Castratech. Castratech is owned by members of The Sisterhood, of course.

This artist is proving to be popular. Here is his Pixiv account. 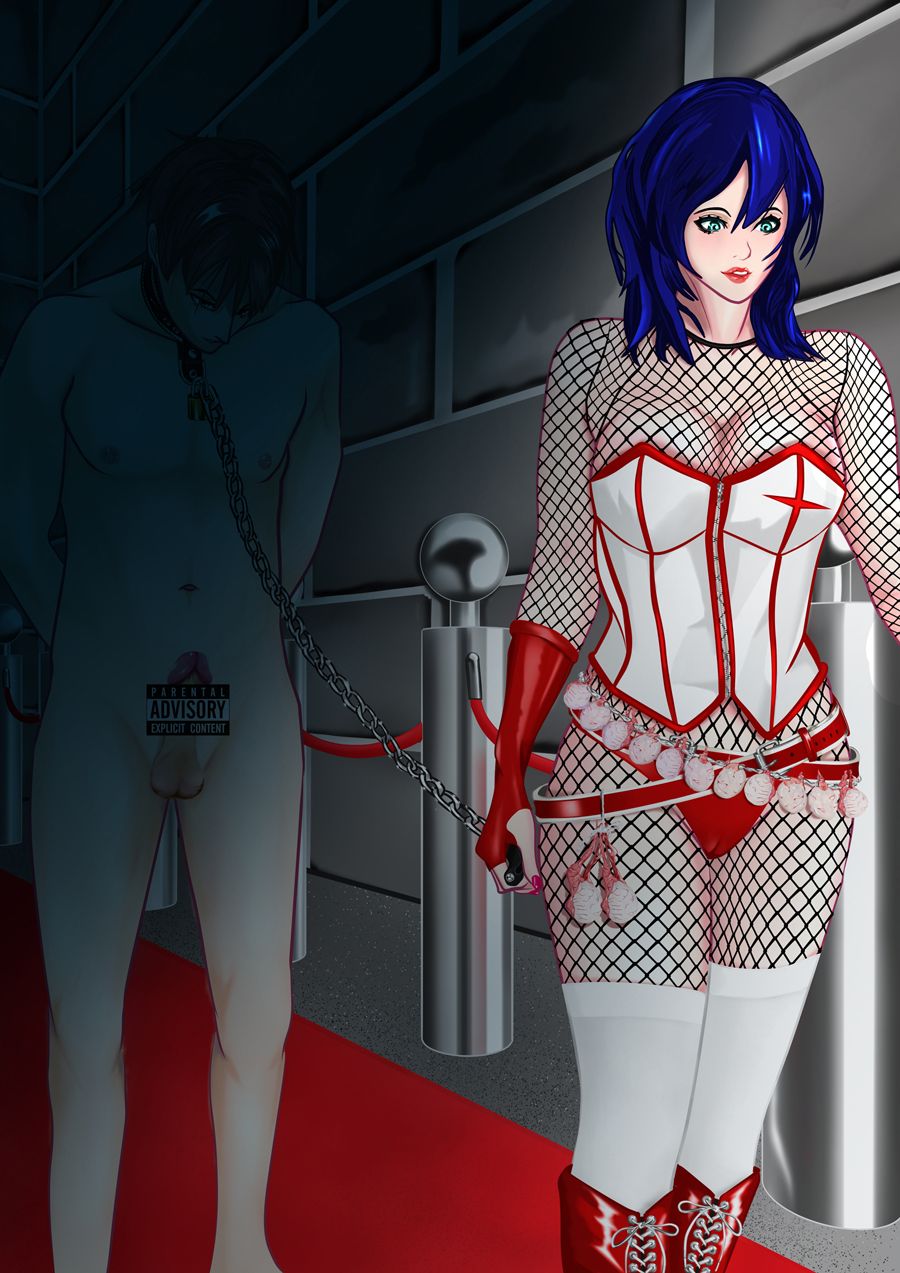 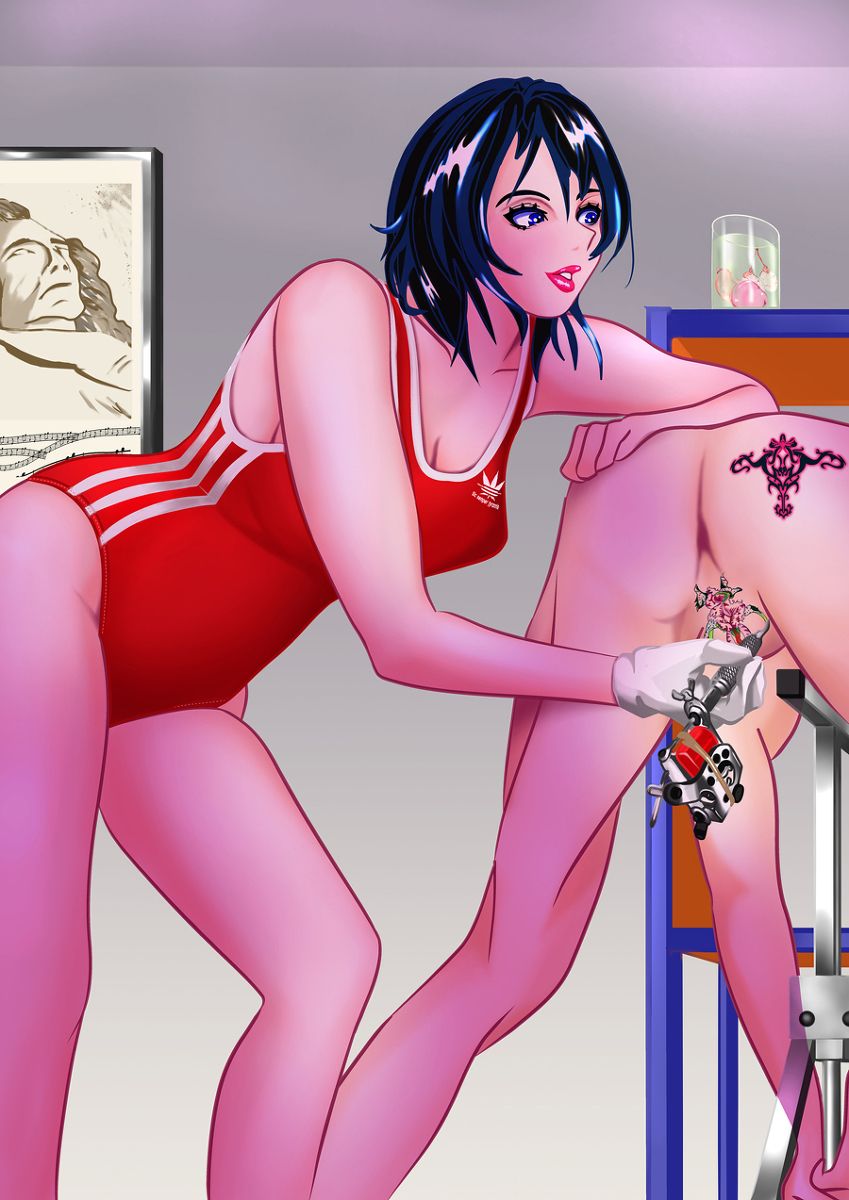 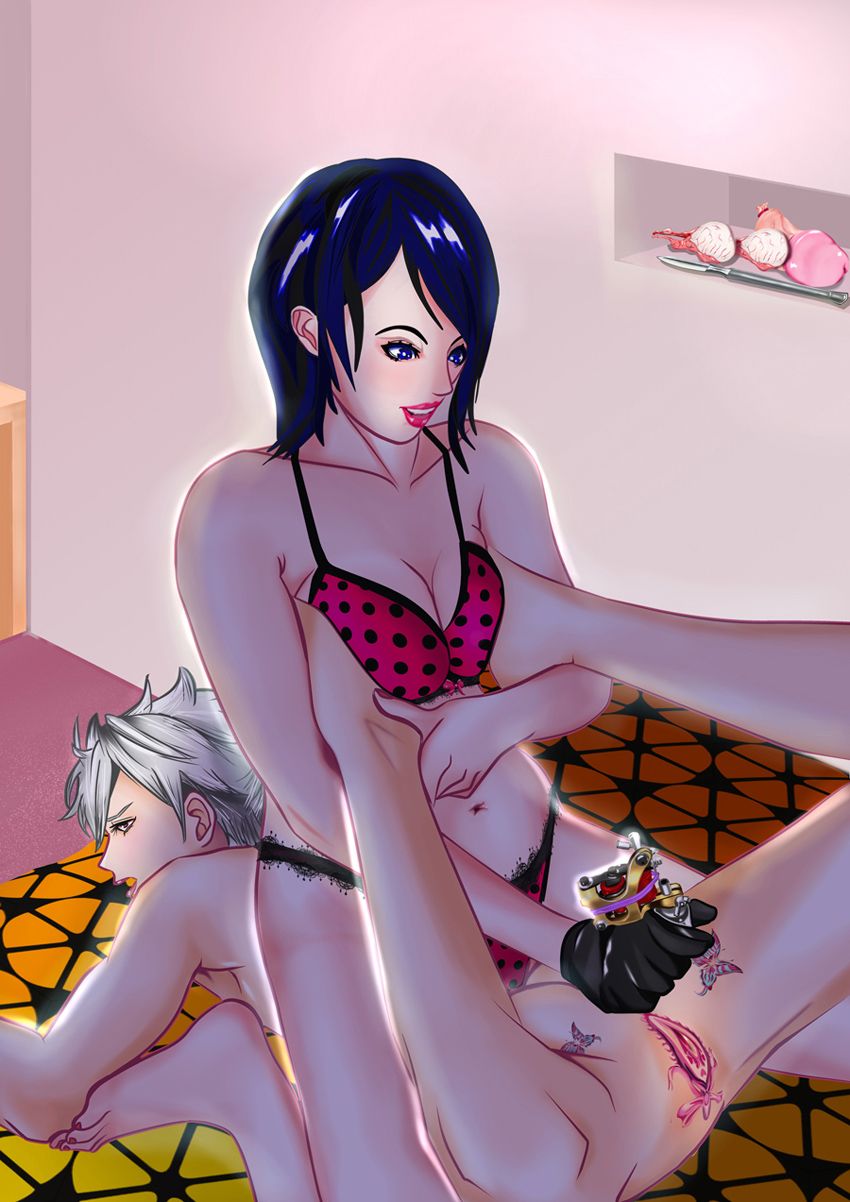 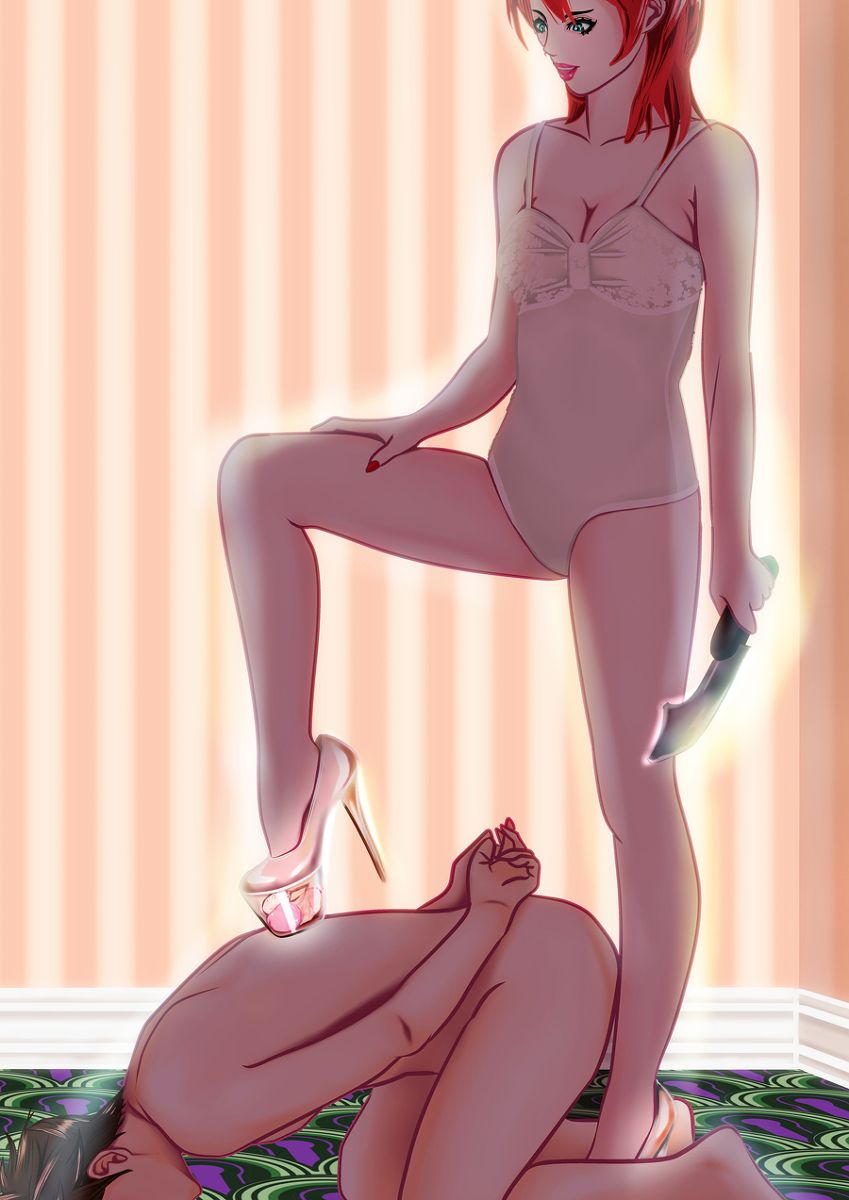 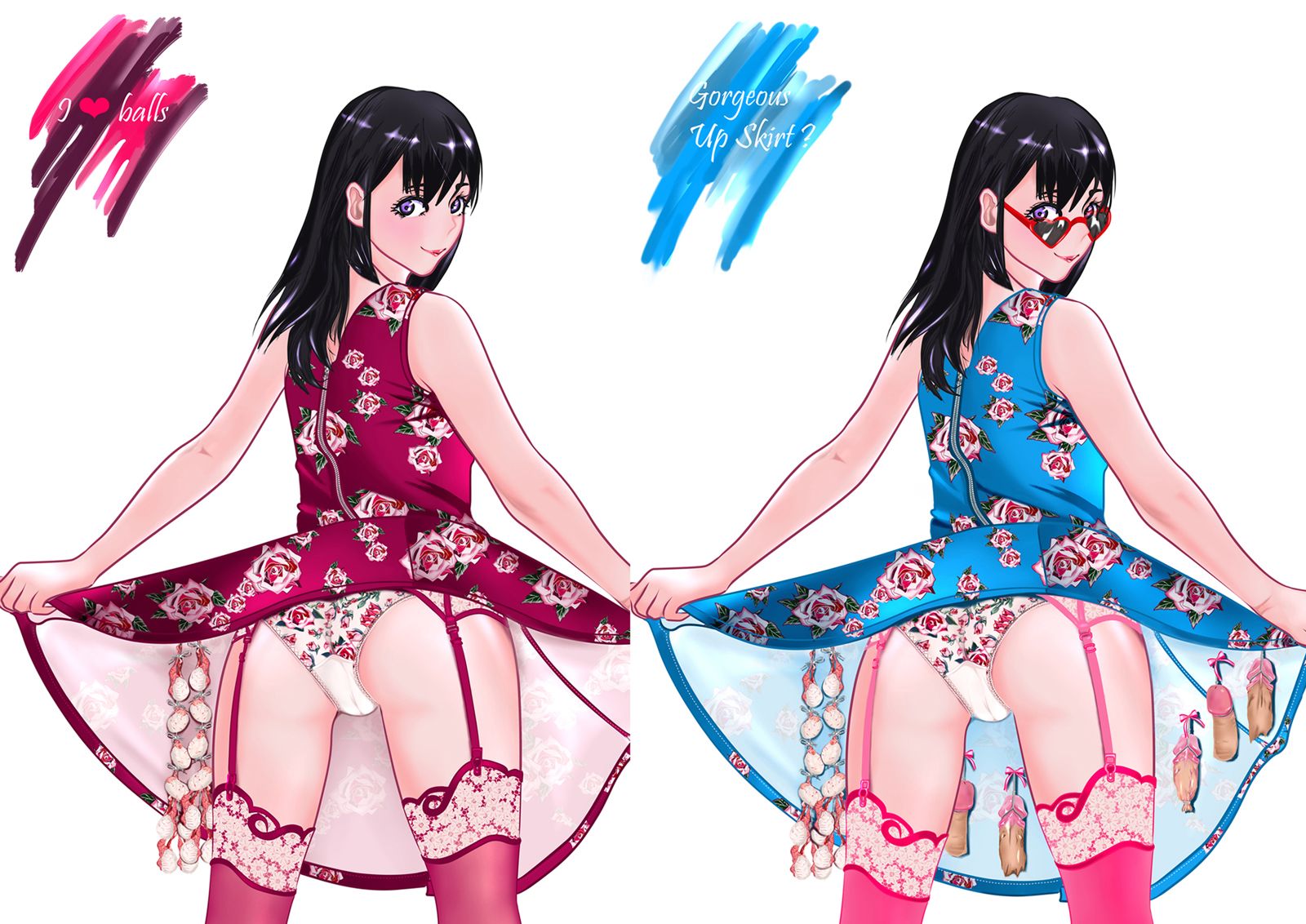 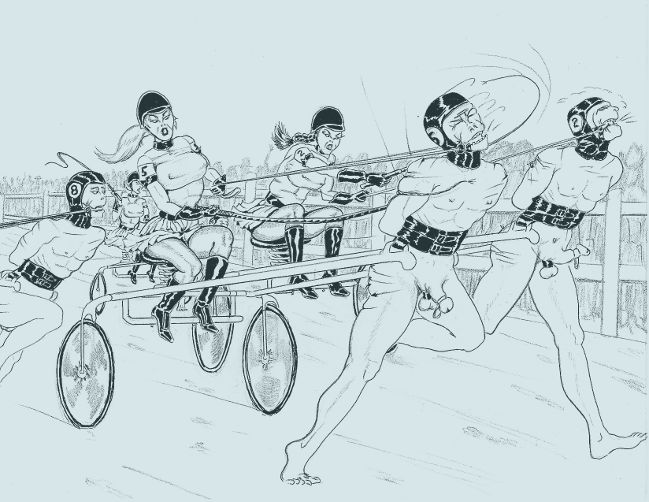 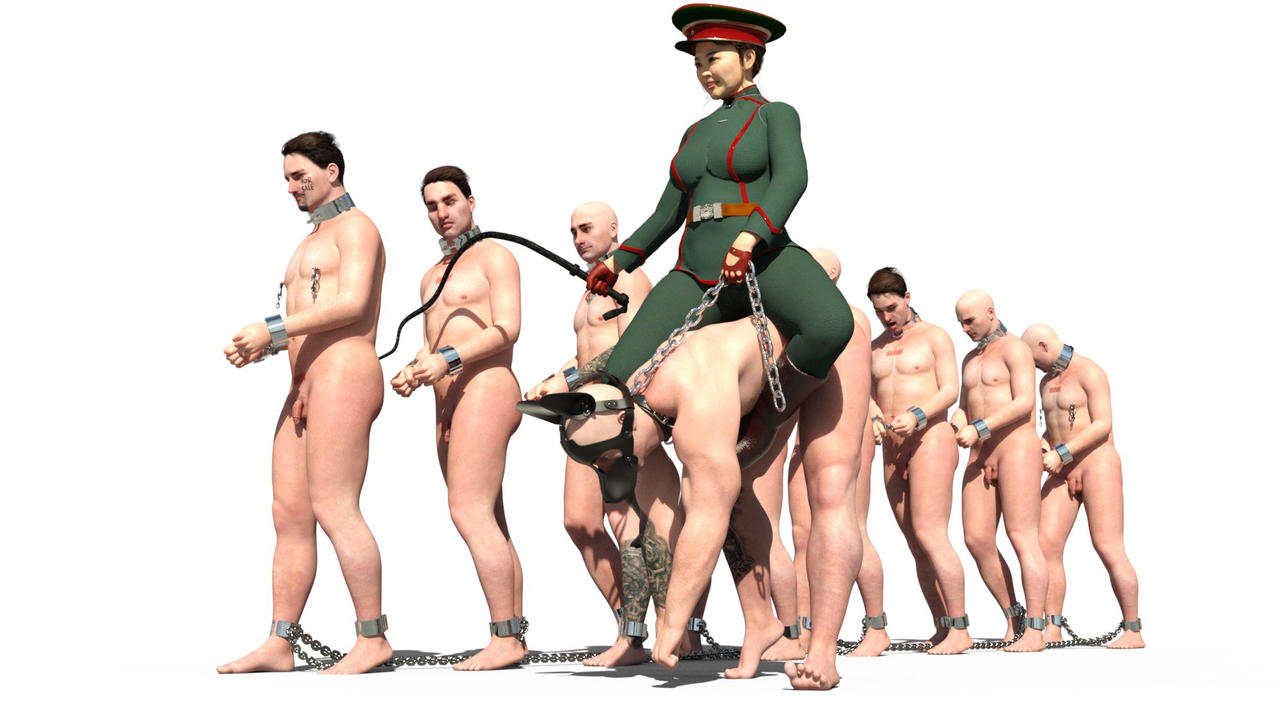 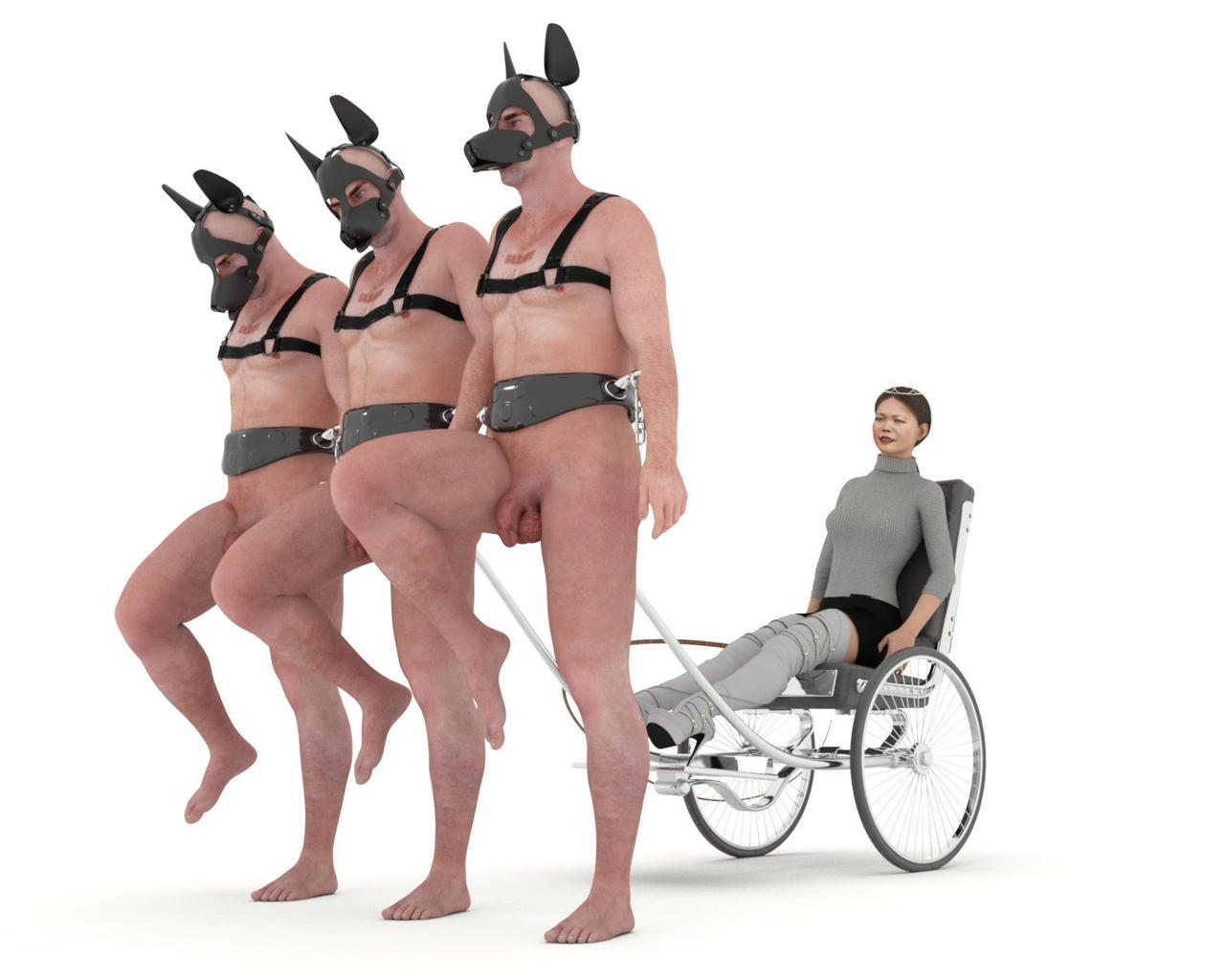 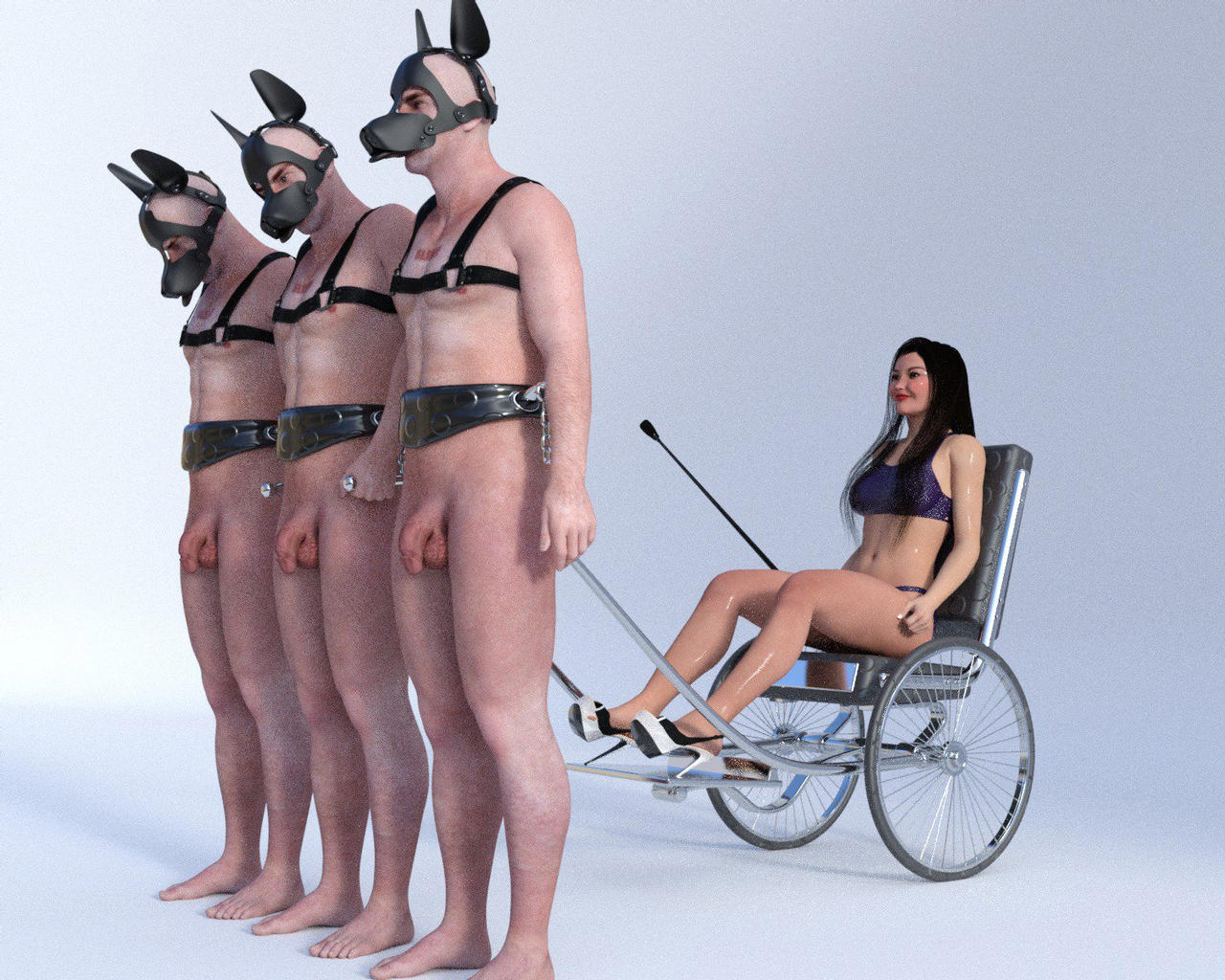 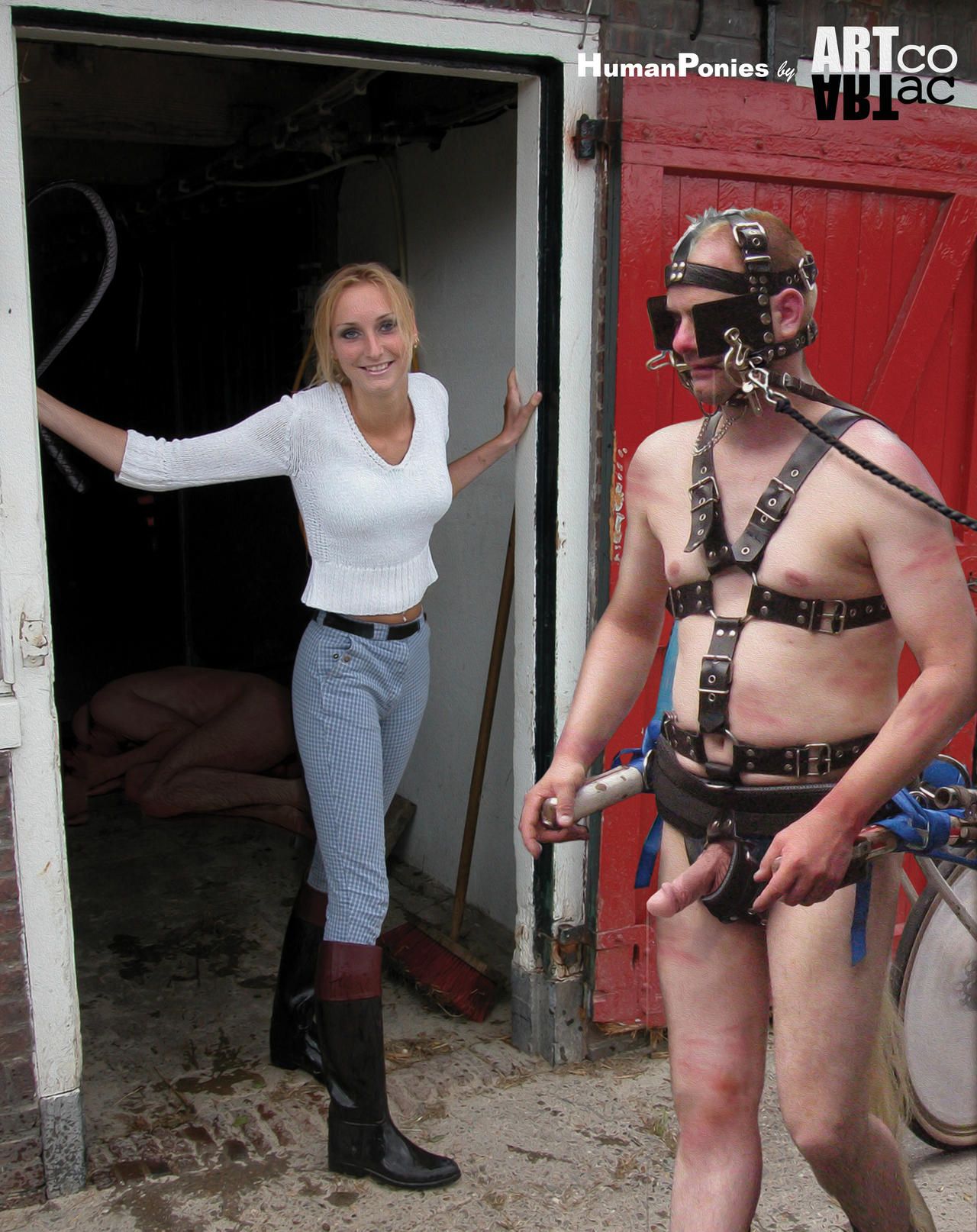 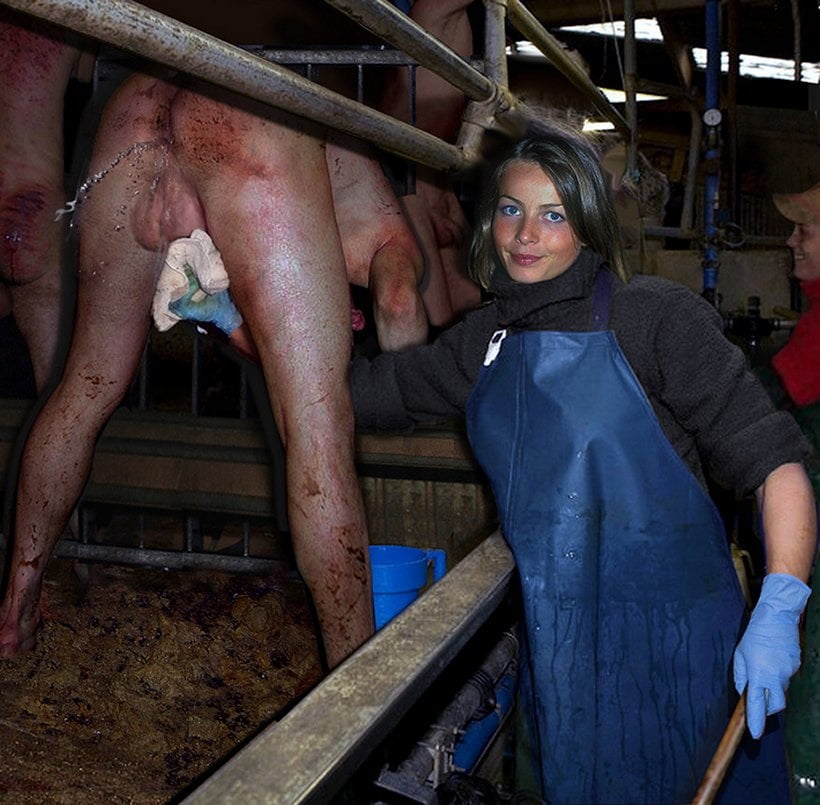 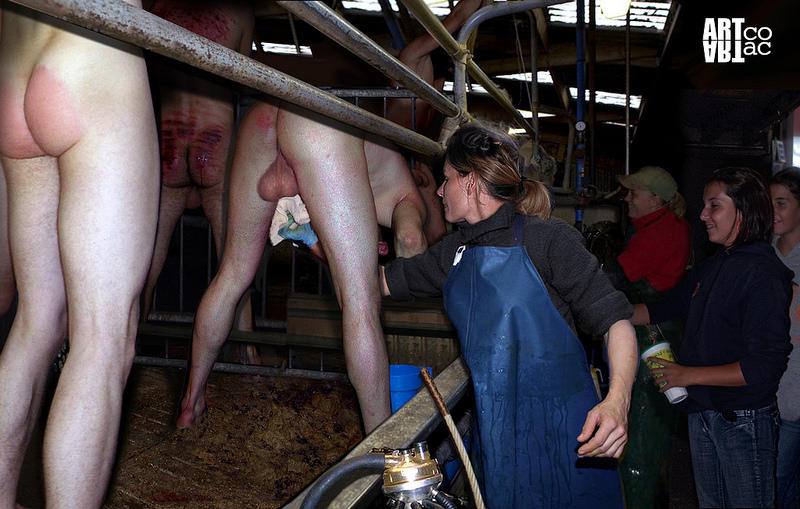 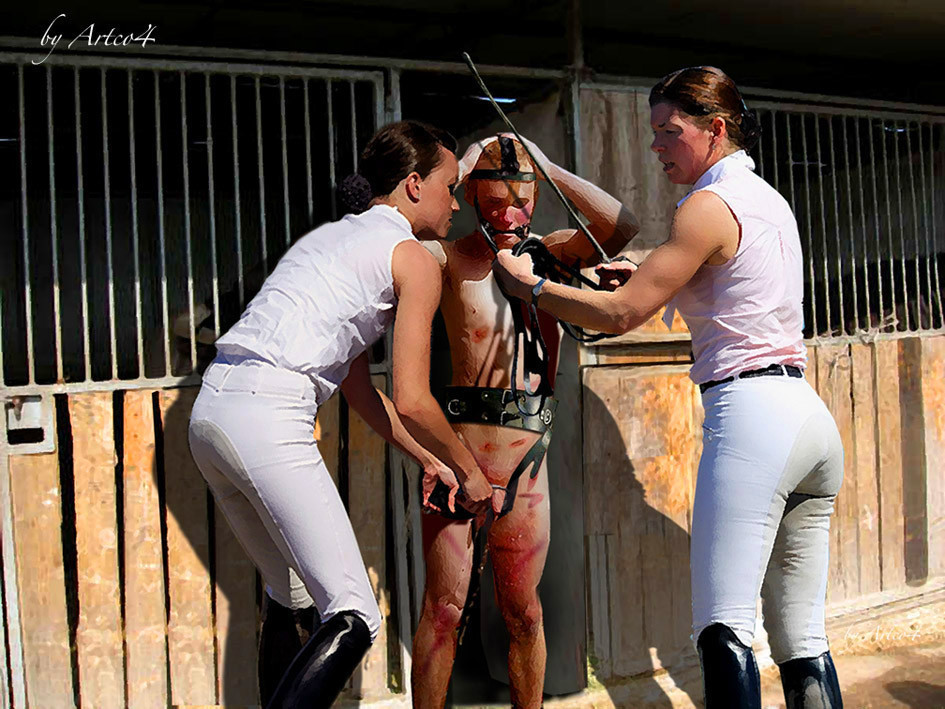