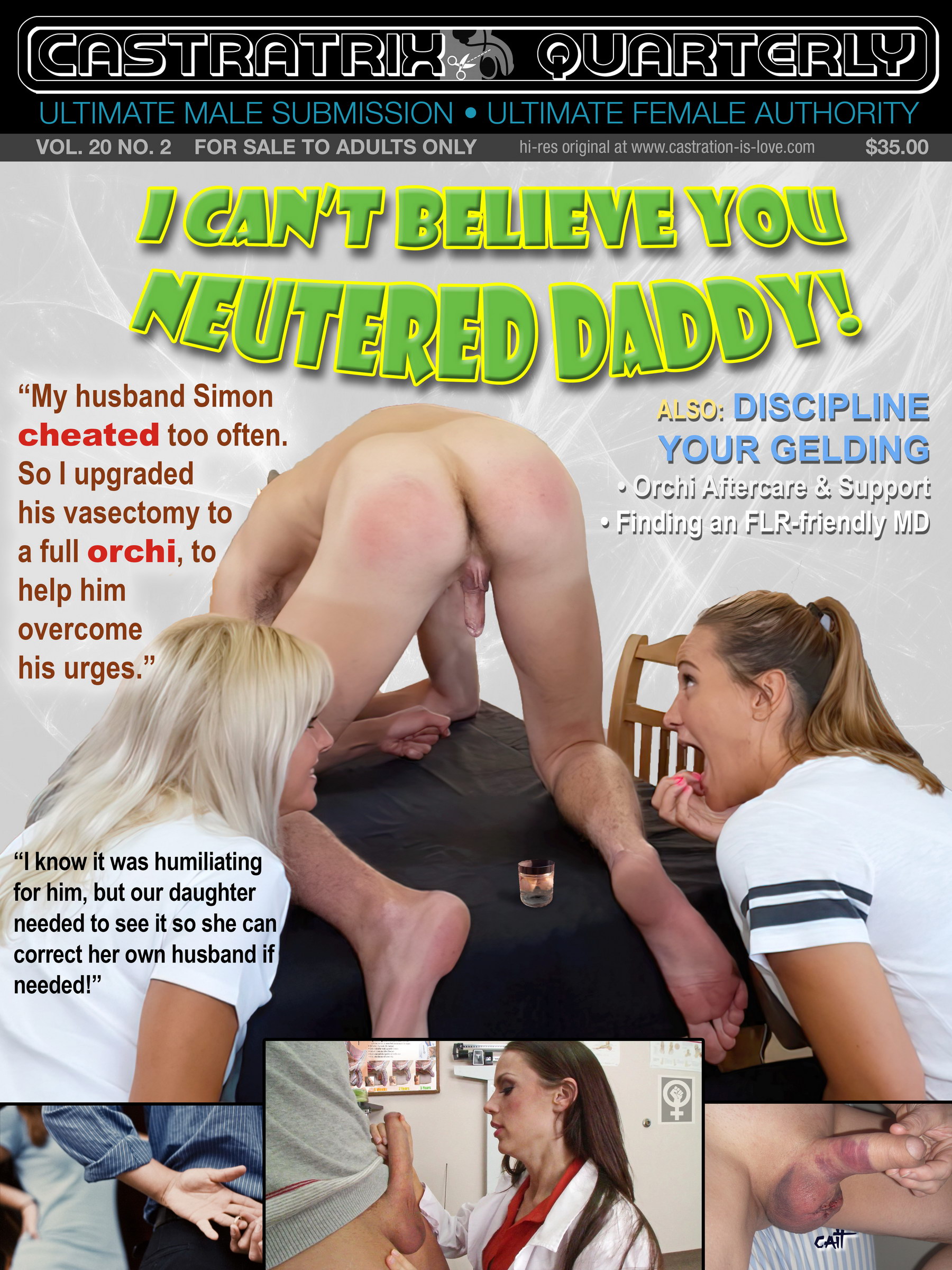 [Lucas and Elvert have been magically transformed into horses to pull Cinderella’s carriage.]
Lucas and Elvert stood stamping in their traces, for the first time smelling with all the keenness of an animal’s sense the luscious scent of a pretty young woman’s moist excitement. Their huge penises dangled hose-like and nearly dragged the ground in a helpless response to the sweet and pungent odor of Rachel’s slit. Lucas neighed and tossed his head, raising his nostrils into the air to catch more of the scent that drove him mad. Both horses neighed their mute and helpless torment.
Rachel turned her head and squirmed, then she giggled–the delighted sound of her merriment, soft and low, mingling with the intimate noises of their coupling. Her flashing eyes were fixed on the huge penises of Lucas and Elvert while her cheeks flushed with lascivious glee. “You nasty things! How indecent your dangling penises are. How indecent indeed! I shall have you smartly whipped for this rude affront to morality!”
Lucas and Elvert now well understood the torment of the slaves Circe transformed from men into animals in Homeric legend. To grovel, helpless and speechless, newly dull-witted at the feet of the laughing Goddess and her lewd, impudent maids, was torment enough. Yet even that subjugation was terribly compounded by the fact that their keen animal senses could smell every luscious scent from the intimate parts of their giggling feminine tormentors, a smell to drive them mad and tease them with what they could never hope to have.
Below the formal garden, viewing the opposite side of Victoria’s carriage stood two Prumm footmen in the gold and lavender livery that Godilieva favored for her servants.
Two pretty royals maids–on their way to check with a wine steward as to the whereabouts of a fine old vintage, ideal for the celebration–paused agreeably to masturbate the Prumm footmen with but scant persuasion and set themselves readily to their task. In a trice, the maids freed the two throbbing pricks and set about rapidly skinning them up and down in their lewd bare hands. As the footmen gasped and strained, eyes clenching shut in furtive pleasure, one maid caught sight of Lucas’ and Elvert’s dangling pricks. She laughed and nudged her companion with her free hand.
“Look there! See those big horses harnessed to that lovely huge carriage of silver and glass? They must wish that they were getting a little of this themselves!”
Both pretty young women giggle between exclamations of amused outrage at the carnal sight of animal excitement–even as they masturbated the now-panting Prumm footmen with their wicked hands. As the footmen leaned into the briskly rubbing hands of the smirking maids, and as their sperm splashed from their organs to glisten on the stone pavement–their masturbatrices indignantly agreed that the offending beasts should be gelded.

Here is another formative milestone for my castration fetish.
The age of 12 was a very eventful one with respect to formative sexual experiences. I was maturing rapidly. I had gained my full height and puberty was in full swing.

A Meek Wolf Among Savage Lambs

Also at this time my crazy older sister took a few moments to explain castration to me. Mostly she focused on the castration of domestic animals. For some reason her description of the lives of oxen captured my fancy. She described them as, “those poor oxen”, castrated and then harnessed up for a lifetime of hard work and drudgery. It wasn’t just the castration that appealed to me but the lifetime of humiliation and degradation. And the pathetic, shameful public spectacle of it.
I have a vivid memory of a climax I had while at summer camp that year. I can’t go into too much detail but I remember talking out loud and saying things like, “it’s a shame what they do to those poor oxen”.

I had an older brother that was a bit of a black sheep. He had just got slapped with a paternity suit by a lower-class bimbo he was unwise enough to spend a little time with. I think this was the main motivation for my crazy older sister to buy me a subscription to Playboy in order to help me develop a healthy solo outlet so I’d be less tempted by… unsuitable partners.
Nuts, huh? And where were my parents? Their permissive attitude went way over into neglect, in retrospect.
Anyway, this was the beginning of another related fetish, masturbation humiliation, i.e., being relegated and side-lined in that respect.
Another aspect of this was that I was bewildered at why I didn’t find the photos or other erotica in these magazines to be arousing. I began to realize I wasn’t normal. I’ve always been primarily heterosexual. The problem was the power dynamic was wrong. And I have always found photographs to be cold, washed out and unengaging. I much prefer hand-drawn art.

I remember hearing at this time my mother describing how she first learned what the euphemism, “having a dog fixed”, meant. She was quite amused when she learned what it meant, that it meant surgically treating a dog for the owner’s benefit, not the dog’s. Ever since, this usage of ‘fixed” has had fetishistic power for me.

The James Bond movies starring Sean Connery were very popular at this time and I wanted to be cool and manly too so I read all the novels (didn’t really enjoy them, though).
In, “You Only Live Twice”, there is a description of a technique used by male geishas in Japan for temporarily forcing their testicles back up into their abdomen. This riveted my attention. I remember trying to describe this to my mom while we were alone together in a car, her driving and me in the passenger seat. I got all flustered and stammered and she just shrugged it off.

The Beatles were becoming very popular at this time and I developed a mild crush on John Lennon. This was the first step in my lifelong attraction to effeminate young men and androgynous women.

Synopsis: Tim has been sneaking into his next door neighbor’s apartment to try on her lingerie. Madge and Tim’s foster mother catch him in the act. Tim is punished and all is forgotten until he does it again. This time Tim is turned over to Madge who has made special plans. Since he won’t stay out of lady’s lingerie, she is going to make absolutely sure Tim gets everything he can imagine and a lot more!

Here’s the link. It’s got a great castration scene. Enjoy!

Here is another formative milestone for my castration fetish.

The next one came when I around 9 years old.
There was an episode of the Sunday Disney show called, “Almost Angels”, about the Vienna Boy’s Choir. I watched the show with my parents and some of my siblings, in particular, an older sister who was to have a great impact on my sexual development.
This sister was about 10 years older than myself and was unusually bossy and over-bearing. She always liked to show off how smart she was. Later in life she was diagnosed as bi-polar.
She must have learned somewhere about the castrati singers that existed in the history of Europe and thought that was a funny and cute fact. So when this TV show came on she wanted to show off this special knowledge so she asked out loud, “Are they castrated? Have they been castrated?” She asked a couple times and had to shushed by my mother.
Her keen, devilish interest in this gruesome practice made a deep and lasting impression on me. It gave the word ‘castrate’ itself an almost magical power in my mind. A true “fetish” in that sense. And I don’t think I even knew what castration meant at that time.

Another more solitary experience from this time came from seeing a “Spy vs. Spy” comic strip in “Mad Magazine”. This comic strip was about two spies, one white, one black, that were always scheming against each other.
This particular strip had one of the spies tending a hotdog stand. I somehow misread the plot to be that one of the spies had tricked the other into losing his penis by having it put on display in the hotdog stand. I found this mysteriously arousing. This incident also showed a how trickery and deceit could amplify my arousal.

Another incidental side-light was a black-and-white WWII movie on TV I happened to be watching all alone one afternoon. I’m not sure how old I was. I could have been 11 or 12.
I really hadn’t been paying much attention to the movie but when it came to the end it had some nurses playing a trick on a US soldier/sailor (pretty sure it was a sailor) they had in their care. They put an ointment under some bandages on his back that caused an unpleasant burning sensation. They laughed at his discomfort and when he asked for relief they ripped off his bandages with a quick yank, which caused additional distress and made them laugh even more.
I got up and walked out of the TV room in a daze, stunned by what I had seen. Trickery, mild sadism and abuse of trust were the arousing factors.
I’ve never found out what the movie was, but I haven’t searched very hard either. 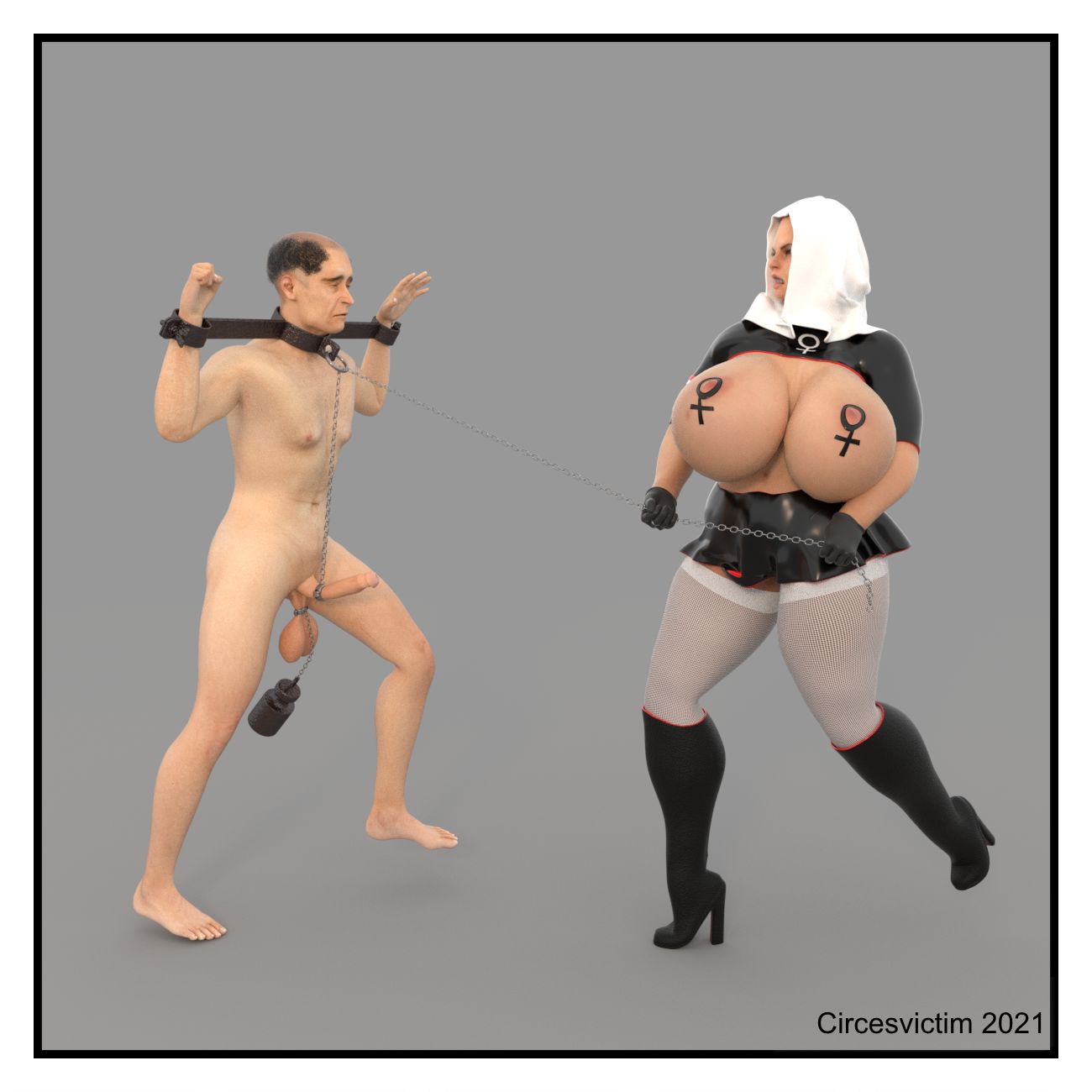 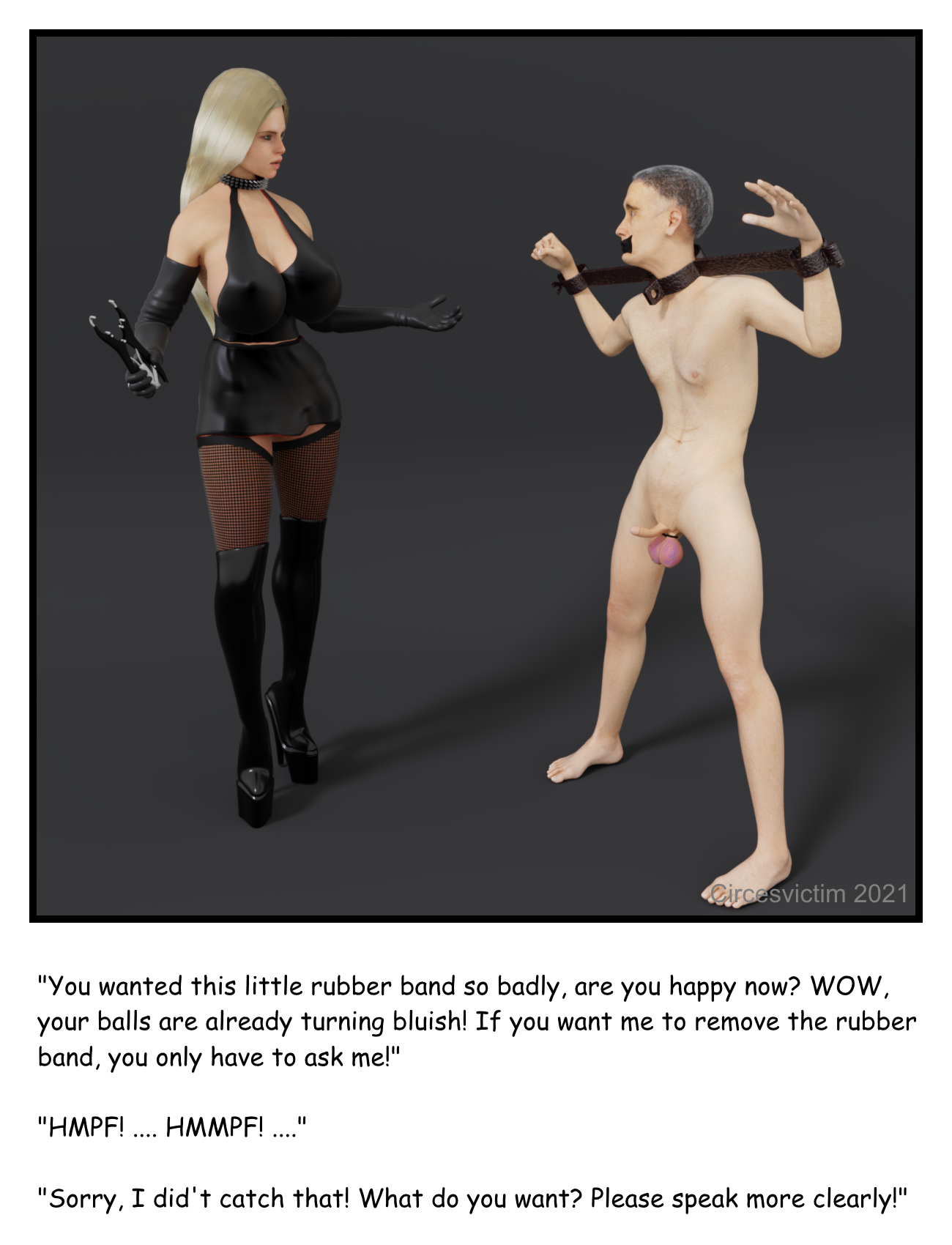 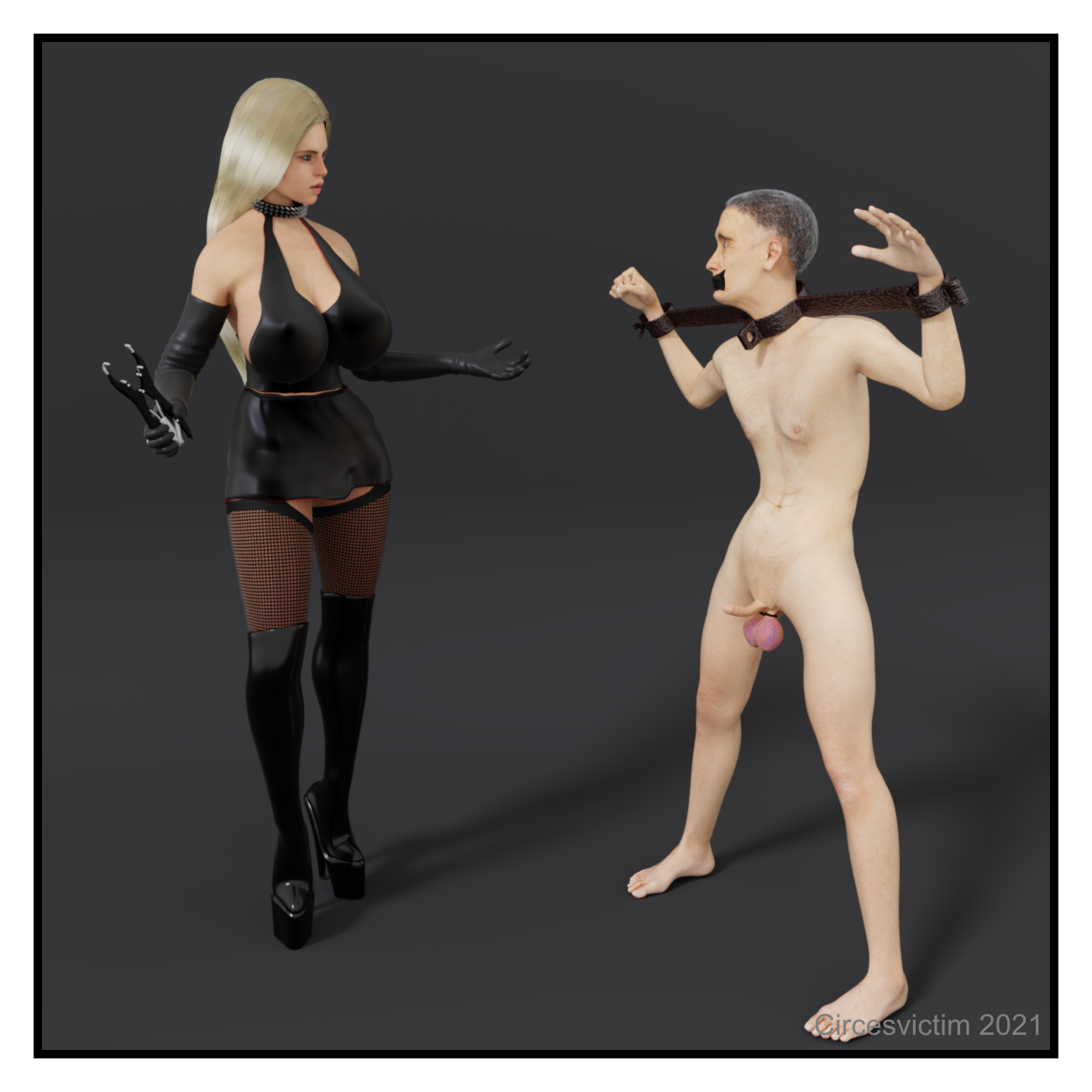 Having a castration fetish is a mixed blessing. It provides intense pleasure as well as great frustration since it can never be really experienced. On balance it’s really an affliction.
It’s not my only fetish. It comprises the strongest member of a small constellation of female domination fetishes.
I trace my own development of this fetish from an early age. I’d like to share the milestones of this with the readers of this blog.
Although I didn’t explicitly realize I had this fetish until I was 12 years old there were some significant milestones prior to this.
Here is the first milestone.

I suffered a severe trauma to my right hip and leg when I was 2 and a half years old and had to spend months in traction in a pediatric ward. Fortunately, I lived near a superlative hospital and they were able to help me recover so that I was only left with a pronounced limp and poor circulation in the affected leg.
Suffering a childhood trauma is a common early experience for people with this fetish. I learned this from a survey that some psychologists did a few years ago of the people that frequent the Eunuch Archive site. It’s common but not universal.
Psychologically, the after effects were more severe. It left me feeling emotionally cold and cut off from others. I grew to be a timid, passive person.
Sexually, I’m sure the inactivity and boredom of being in traction caused my sexual feelings to grow into a larger focus and component of my life than it would have otherwise.
It is also obvious that my medical fetish and my fetish for women (i.e., nurses) doing things to me grew out of this formative experience.
Bottom line is, this experience really side-lined me for life. 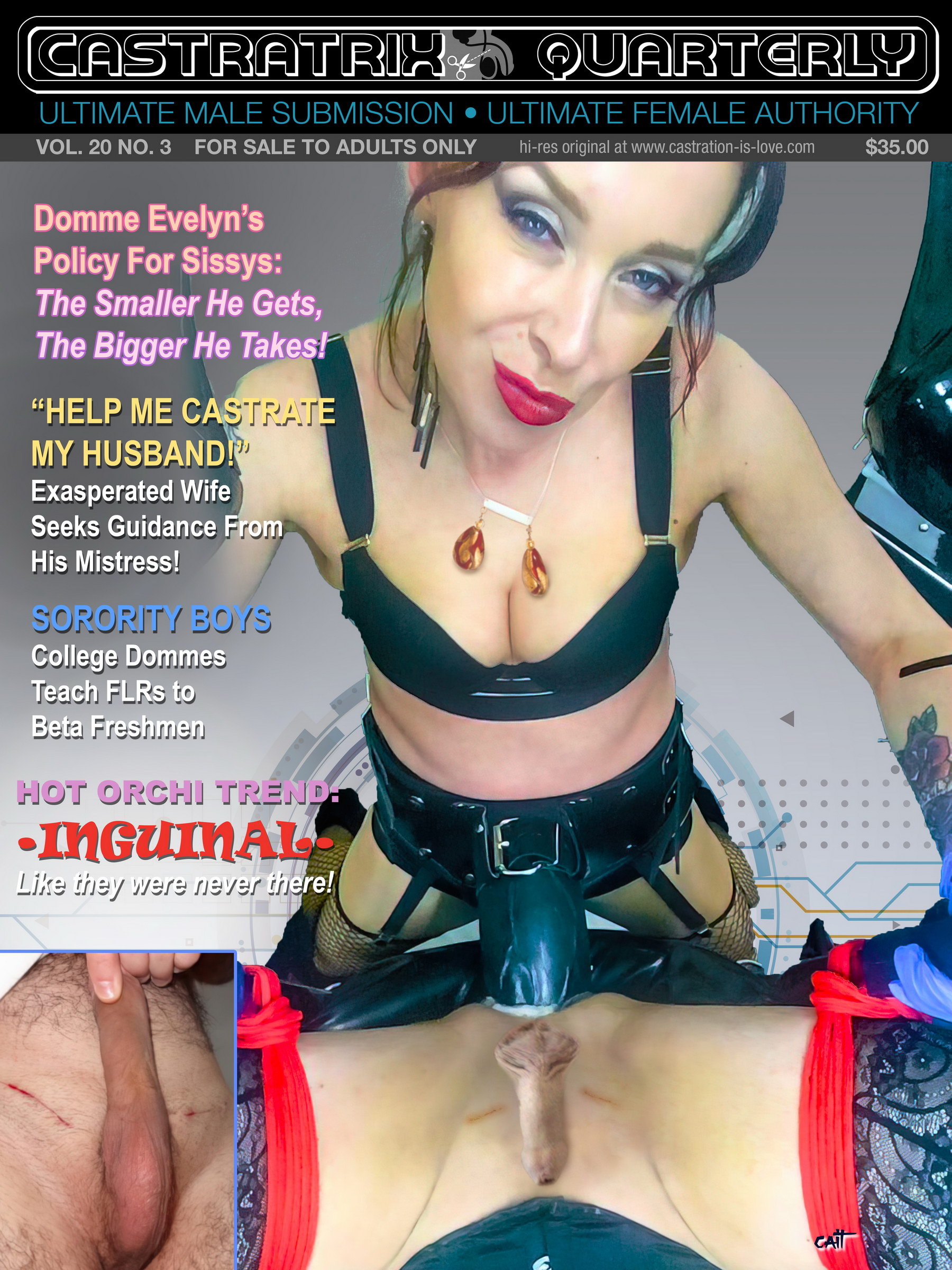