Here is a great new talent, Zontar22. Here is his DeviantArt profile.

“Castracare is a private company that works for the Testicle Licencing Authority. Here, we see a castration team preparing to receive the next patient into the castration chamber.” 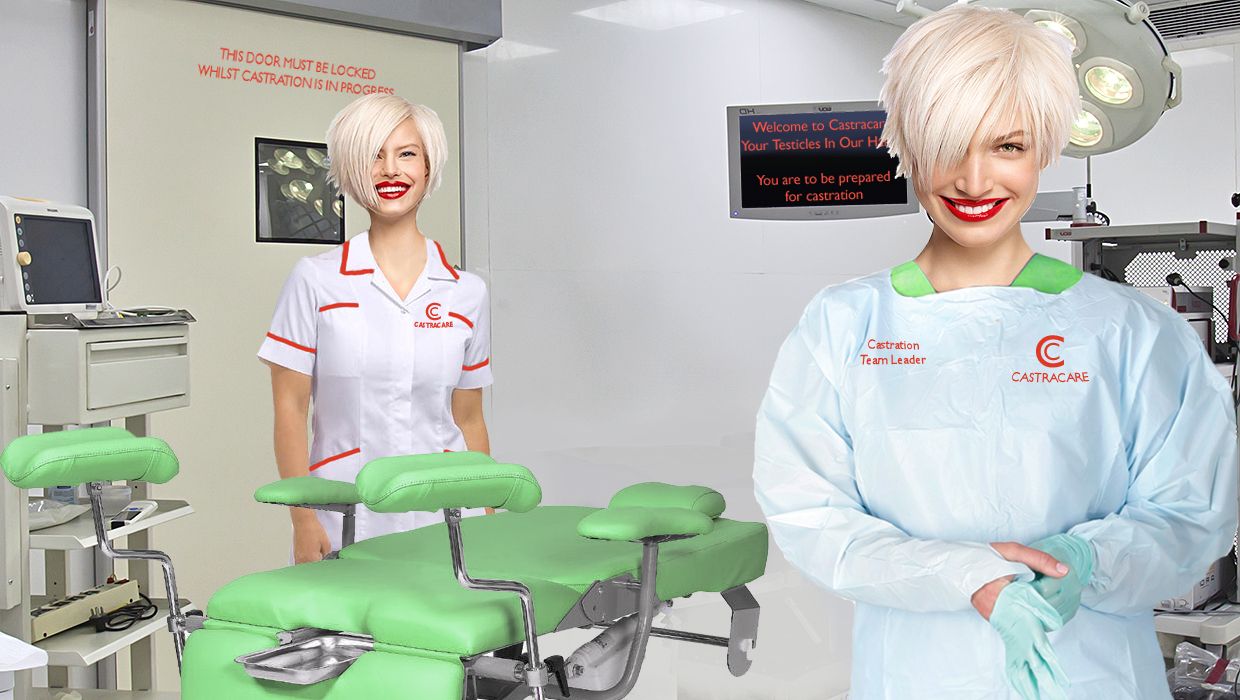 This is an excellent review that gives a short summary of each of the 35 fantasies. Here’s where to buy it on Amazon.

AUNT ABIGAIL’S TRIMMIN’ PARLOR
The punishment for men cheating, exposing one’s self or jerking off is severe, but it keeps this world in line.

CASTRATION SLUT
A college boy is approached by a journalist at a bus stop. She wants him to come back to her apartment and jerk off in front of her. But the campus paper has an article about a rash of mysterious castrations on campus. College boys just need a little guidance.

COMPANY SISSY
The narrator is interviewed by the company doctor after filling out a questionnaire and placed with Liza, an executive who takes a special interest in him, fondling and goosing his butt, then inviting him to her home. On tap is a penetration. Then, on a subsequent occasion, to a friend’s place to watch as another woman penetrates Ralph. Liza orders the narrator to jerk off as he watches the scene. Liza tells the story of Ralph’s deflowering by Bruce. This story is to introduce the narrator to his own future with the company. There is a special requirement for Personal Assistants to a Vice President.
This story seems disjointed, a series of episodes that are not well connected.

CONSULATATION WITH A CASTRATRIX
Ms. Veronika van Gelder runs a busy clinic for castration in San Francisco. Mr. Jones enters for a consult. Nurse Elaine and Nurse Maryann will attend the consultation after Mr. Jones signs the Consent Form. Very quickly, they determine that Mr. Jones has a secret wish…

DOWN ON THE FARM WITH MS. VAN GELDER
Ms. Van Gelder is overcommitted. She needs a rest. She retreats to her farm to find one of her hired hands has let his fantasies run away with him.

DREAM FULFILLMENT
This is really not a story at all. It might form the outline or one.

ERIC’S CORRECTION
Sandra Jones brings Eric to the correction center, where Julia gets him strapped down for his examination. Life will be a lot less stressful for the couple.

HOUSE HUSBAND
The narrator chooses Howie to be her house husband, starting with establishing her dominance over him and taking steps to erase his manhood. She then proposes marriage. Once he is serving her as her house husband, his independent streak is taken care of.

JAKE GETS CLIPPED
Samantha runs a ranch with ponyboys as a main feature. She uses them sexually, for oral satisfaction and hosts parties, where the servants are eunuchs (who provide sexual service for her guests). Jake has been a ponyboy on her ranch for six months and has assumed that he is entitled, due to that length of service. An assumption of entitlement doesn’t get one very far.

KINKY FETISH BOUTIQUE
The narrator enters a fetish store and purchases the last remaining issue of Castratix Quarterly and takes it home. Reading through the magazine, he finds himself extremely aroused. His next copy of the magazine will be gratis.

MANHOOD POUCH
Dorkus Malorkus (an unlikely name) narrates a story of phoning a castration clinic and being welcomed as soon as he admits having a fetish for being castrated. It seems the janitorial position has just opened.

MEN TO BOYS
Donna, Billy Jones’ college girlfriend, makes him call her, ‘mommy’. She encourages him to jerk off and guides his fantasies. There’s a specialist who takes care of boys who jerk off all of the time. She helped Billy’s father.

MOM HAS ME CASTRATED
Eunuchs make excellent servants and we open this story with an auction. Lady Nuttingham introduces Sid, whose mother had him castrated and trained by the Sissy Care Camp ladies.
Sid remembers what led up to these events, living with his mother and his older sister, who teased him and made him jerk off in front of her friends.

MY WIFE TAKES ME TO AUNT ABIGAIL’S
The narrator’s wife has denied him sex in a town where jerking off is punished by castration. His wife teases him until he cannot resist.

PA LOSES HIS NUTS
Pa has been caught by Ma exposing himself to Little Sis. Ma has just the tool for that.

PREPPING A PIGGY-BOY
A castratix narrates her procedure for getting piggy boys so relaxed that they are unaware of the finality of the procedure until they return home and the anesthetic has worn off.

PROPERTY TRANSFER
Victoria examines a row of naked, gagged males, shackled and bent over a bench. She is to choose one for castration to be her oral slave.

RETIRING AN OLD SPERM BULL
When production falls off at the sperm milking farm, the bull is retired. That evening, dinner is delicious.

SATURDAY AFTERNOON
When a girlfriend discovers her boyfriend’s secret castration fetish, all she needs is consent.

SCROTUM POACHING
Gloria Gelder takes on an extra-credit project for her Biology class and discovers an ancient papyrus in the special collections archive. It tells of a dark art that she makes into her passion.

SEDUCTION
Society is selectively breeding more pliable and agreeable men all the time but there are still a few holdovers. Mr. Jones is in for some serious adjustments.

SEXUAL BEHAVIOR CONSULTANT
Stan Jones becomes erect during a routine physical while Jane, the nurse practitioner, is examining his testicles. Jane makes an appointment for him with Dr. Brown and hands him pre-appointment instructions, which he follows. Dr. Brown practices in the field of sexual behavior management. It may turn out that the clinic’s strongest treatment alternative is required.

SPERM COW FARM
The life of a sperm cow is hard, they are in a tight chastity until milking time and production quotas must be met.

THE OLD BULL
A sly, seductive 40-year-old picks up the old bull. She’s going to turn him into her sweet little angel forever.

THE PERFECT SERVANT
A conversation between Lady A and Lady B about how Rachel made her husband into her more useful and manageable servant.

WALK-INS WELCOME
Stan stops in front of a Victorian house in San Francisco in front of a sign that reads “Certified Public Castratix” and welcomes walk-ins. Ms. Van Gelder invites him in for an explanation and demonstration.

WIFE OF A BIG-BOTTOMED SISSY
The narrator describes how his wife increased his weight by feeding him and reducing his exercise. He stumbles on a magazine his wife has in the house called “Sissy Care,” and she discovers him jerking off to an article. His wife has been playing with him anally and, on this day, chooses to peg him. She describes her friend, Bernice’s relationship with her husband, Larry, who the narrator hasn’t seen in a while, as Bernice has transformed Larry into her house-husband. They go to a clinic, where the narrator is shown a book with photos of a number of men who have been castrated.

YOUNG DAVID ON AUNT ABIGAIL’S FARM
Aunt Abigail likes to work her farm topless. This causes David no small amount of desire and he relieves himself often. He witnesses a castration of a farm hand and, while watching relieves himself, not knowing Aunt Abigail’s nieces witness his act. They go skinny-dipping, giving David his ultimate thrill.
The author has created a world where castration of human males is frequent, painless and erotic. The end result is a “good boy,” and men are attracted to the act. For anyone into this kink, there will be a lot of grist for the mill here but I found many of the stories and many of the themes repetitive. There are farms, the creation of overweight sissies, frequent appearances by Ms. Veronica Van Gelder, visits to clinics where the final orgasm occurs before castration. There is mild humiliation.